Adaptive Optics Imaging and Spectroscopy of Cygnus A. I. Evidence for a Minor Merger

We present Keck II adaptive optics near-infrared imaging and spectroscopic observations of the central regions of the powerful radio galaxy Cyg A. The 0.05" resolution images clearly show an unresolved nucleus between two spectacular ionization/scattering cones. We report the discovery of a relatively bright (K'~19) secondary point source 0.4" or 400 pc in projection southwest of the radio nucleus. The object is also visible in archival Hubble Space Telescope optical images, although it is easily confused with the underlying structure of the host. Although the near-infrared colors of this secondary point source are roughly consistent with those of an L dwarf, its spectrum and optical-to-infrared spectral energy distribution (SED) virtually rule out the possibility that it may be any foreground projected object. We conclude that the secondary point source is likely to be an extragalactic object associated with Cyg A. We consider several interpretations of the nature of this object, including: a young star cluster peering through the dust at the edge of one of the ionization cones; an older, large globular cluster; a compact cloud of dust or electrons that is acting as a mirror of the hidden active nucleus; and the dense core of a gas-stripped satellite galaxy that is merging with the giant elliptical host. The data presented here are most consistent with the minor merger scenario. The spectra and SED of the object suggest that it may be a densely packed conglomeration of older stars heavily extincted by dust, and its high luminosity and compact nature are consistent with those of a satellite that has been stripped to its tidal radius. Further spectroscopic observations are nevertheless necessary to confirm this possibility.

Based on observations with the NASA/ESA Hubble Space Telescope, obtained from the data archive at the Space Telescope Science Institute. STScI is operated by the Association of Universities for Research in Astronomy, Inc., under NASA contract NAS 5-26555. 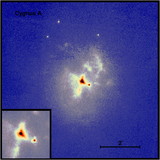