The Probability Distribution Function of Light in the Universe: Results from Hydrodynamic Simulations

While second and higher order correlations of the light distribution have received extensive study, the lowest order probability distribution function (PDF)-the probability that a unit volume of space will emit a given amount of light-has received very little attention. We estimate this function with the aid of hydrodynamic simulations of the ΛCDM model, finding it significantly different from the mass density PDF, and not simply related to it by linear bias or any of the other prescriptions commonly adopted. If the optical light PDF is, in reality, similar to what we find in the simulations, then some measures of Ωm based on the mass-to-light ratio and the cosmic virial theorem will have significantly underestimated Ωm. Basically, the problem is one of selection bias, with galaxy-forming regions being unrepresentative of the dark matter distribution in a way not described by linear bias. Knowledge of the optical PDF and the plausible assumption of a lognormal distribution for the matter PDF will allow one to correct for these selection biases. We find that this correction (which amounts to 20%-30%) brings the values of Ωm estimated by using the mass-to-light ratio and the cosmic virial theorem to the range Ωm=0.2-0.3, in better agreement with the Wilkinson Microwave Anisotropy Probe result than the uncorrected estimates. In addition, the relation between mass and light PDFs gives us insight concerning the nature of the void phenomenon. In particular, our simulation indicates that 20% of mass is distributed in voids, which occupy 85% of volume in the universe. 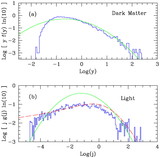