The Cosmic Evolution of the Galaxy Luminosity Density

We reconstruct the history of the cosmic star formation in the universe by means of detailed chemical evolution models for galaxies of different morphological types. We consider a picture of coeval noninteracting evolving galaxies in which elliptical galaxies experience intense and rapid starbursts within the first gigayears after their formation and spiral and irregular galaxies continue to form stars at lower rates up to the present time. Such models allow one to follow in detail the evolution of the metallicity of the gas from which the stars are formed. We normalize the galaxy population to the B-band luminosity function observed in the local universe and study the redshift evolution of the luminosity densities in the B, U, I, and K bands, calculating galaxy colors and evolutionary corrections by means of a detailed synthetic stellar population model. Our predictions indicate that the decline of the galaxy luminosity density between redshift 1 and 0 observed in the U, B, and I bands is caused mainly by star-forming spiral galaxies that slowly exhaust their gas reservoirs. Elliptical galaxies have dominated the total luminosity density in all optical bands at early epochs, when all their stars formed by means of rapid and very intense starbursts. Irregular galaxies bring a negligible contribution to the total luminosity density in any band at any time. We study the cosmic missing-metal crisis and conclude that it could be even more serious than what has been assessed by previous authors, if the bulk of the metals were produced in dust-obscured starbursts associated with the early spheroid formation. The most plausible site for the missing metals could be the warm gas in galaxy groups and protoclusters, in which the metals could have been ejected through galactic winds following intense starbursts. Finally, we predict the evolution of the cosmic star formation and supernova II and Ia rates and obtain the best fit to the observations, assuming a Salpeter initial mass function. All our results indicate that the bulk of the stellar mass in most galaxies were already in place at early epochs, and we predict a peak in the global star formation rate at high redshift because of elliptical galaxies. 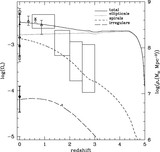