After nearly two years of quiescence, the soft gamma-ray repeater SGR 1900+14 again became burst-active on 2001 April 18, when it emitted a large flare, preceded by few weak and soft short bursts. After having detected the X- and gamma-prompt emission of the flare, BeppoSAX pointed its narrow field X-ray telescopes to the source in less than 8 hr. In this paper we present an analysis of the data from this and from a subsequent BeppoSAX observation, as well as from a set of RXTE observations. Our data show the detection of an X-ray afterglow from the source, most likely related to the large hard X-ray flare. In fact, the persistent flux from the source, in 2-10 keV, was initially found at a level ~5 times higher than the usual value. Assuming an underlying persistent (constant) emission, the decay of the excess flux can be reasonably well described by a t-0.9 law. A temporal feature (a ~1/2 day long bump) is observed in the decay light curve approximately 1 day after the burst onset. This feature is unprecedented in SGR afterglows. We discuss our results in the context of previous observations of this source and derive implications for the physics of these objects. 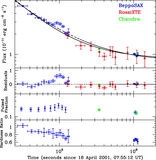