We present evidence of the coexistence of either an AGN or an ultraluminous X-ray source, together with a young superstellar cluster, in the central 3 pc of NGC 4303. The galaxy contains a low-luminosity AGN and hosts a number of starburst regions in a circumnuclear spiral, as well as in the nucleus itself. A high spatial resolution Chandra image of this source reveals that the soft X-ray emission traces the ultraviolet nuclear spiral down to a core, which is unresolved in both soft and hard X-rays. The astrometry of the X-ray core coincides with the UV core within the Chandra positioning accuracy. The total X-ray luminosity of the core, ~1.5×1039 ergs s-1, is similar to that from some LINERs or from the weakest Seyfert galaxies detected so far. The soft X-rays in both the core and the extended structure surrounding it can be well reproduced by evolutionary synthesis models (which include the emission expected from single stars, the hot diffuse gas, supernova remnants, and binary systems), consistent with the properties of the young stellar clusters identified in the UV. The hard X-ray tail detected in the core spectrum, however, most likely requires the presence of an additional source. This additional source could be either a weak active nucleus black hole or an ultraluminous X-ray object. The implications of these results are discussed. 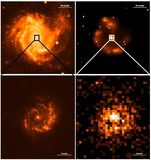