We report on the cosmological parameters derived from observations with the Cosmic Background Imager (CBI), covering 40 deg2 and the multipole range 300<~l<~3500. The angular scales probed by the CBI correspond to structures that cover the mass range from 1014 to 1017 Msolar, and the observations reveal, for the first time, the seeds that gave rise to clusters of galaxies. These unique, high-resolution observations also show damping in the power spectrum to l~2000, which we interpret as being due to the finite width of the photon-baryon decoupling region and the viscosity operating at decoupling. Because the observations extend to much higher l, the CBI results provide information complementary to that probed by the BOOMERANG, DASI, MAXIMA, and VSA experiments. When the CBI observations are used in combination with those from COBE-DMR, we find evidence for a flat universe, Ωtot=1.00+0.11-0.12 (1 σ), a power-law index of primordial fluctuations, ns=1.08+0.11-0.10, and densities in cold dark matter, Ωcdmh2=0.16+0.08-0.07, and baryons, Ωbh2=0.023+0.016-0.010. With the addition of large-scale structure priors the Ωcdmh2 value is sharpened to 0.10+0.04-0.03, and we find ΩΛ=0.67+0.10-0.13. In the l<1000 overlap region with the BOOMERANG, DASI, MAXIMA, and VSA experiments, the agreement between these four experiments is excellent, and we construct optimal power spectra in the CBI bands that demonstrate this agreement. We derive cosmological parameters for the combined cosmic microwave background (CMB) experiments and show that these parameter determinations are stable as we progress from the weak priors using only CMB observations and very broad restrictions on cosmic parameters, through the addition of information from large-scale structure surveys, Hubble parameter determinations, and Type Ia supernova results. The combination of these with CMB observations gives a vacuum energy estimate of ΩΛ=0.70+0.05-0.05, a Hubble parameter of h=0.69+/-0.04, and a cosmological age of 13.7+/-0.2 Gyr. As the observations are pushed to higher multipoles, no anomalies relative to standard models appear, and extremely good consistency is found between the cosmological parameters derived for the CBI observations over the range 610<l<2000 and observations at lower l. 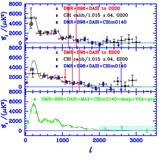