A Search for ``Dwarf'' Seyfert Nuclei. VI. Properties of Emission-Line Nuclei in Nearby Galaxies

We use the database from Paper III to quantify the global and nuclear properties of emission-line nuclei in the Palomar spectroscopic survey of nearby galaxies. We show that the host galaxies of Seyferts, LINERs, and transition objects share remarkably similar large-scale properties and local environments. The distinguishing traits emerge on nuclear scales. Compared with LINERs, Seyfert nuclei are an order of magnitude more luminous and exhibit higher electron densities and internal extinction. We suggest that Seyfert galaxies possess characteristically more gas-rich circumnuclear regions and hence a more abundant fuel reservoir and plausibly higher accretion rates. The differences between the ionization states of the narrow emission-line regions of Seyferts and LINERs can be partly explained by the differences in their nebular properties. Transition-type objects are consistent with being composite (LINER/H II) systems. With very few exceptions, the stellar population within the central few hundred parsecs of the host galaxies is uniformly old, a finding that presents a serious challenge to starburst or post-starburst models for these objects. Seyferts and LINERs have virtually indistinguishable velocity fields as inferred from their line widths and line asymmetries. Transition nuclei tend to have narrower lines and more ambiguous evidence for line asymmetries. All three classes of objects obey a strong correlation between line width and line luminosity. We argue that the angular momentum content of circumnuclear gas may be an important factor in determining whether a nucleus becomes active. Finally, we discuss some possible complications for the unification model of Seyfert galaxies posed by our observations. 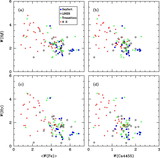