Axisymmetric Dynamical Models of the Central Regions of Galaxies

We present axisymmetric, orbit superposition models for 12 galaxies using data taken with the Hubble Space Telescope (HST) and ground-based observatories. In each galaxy, we detect a central black hole (BH) and measure its mass to accuracies ranging from 10% to 70%. We demonstrate that in most cases the BH detection requires both the HST and ground-based data. Using the ground-based data alone does provide an unbiased measure of the BH mass (provided that they are fitted with fully general models), but at a greatly reduced significance. The most significant correlation with host galaxy properties is the relation between the BH mass and the velocity dispersion of the host galaxy; we find no other equally strong correlation and no second parameter that improves the quality of the mass-dispersion relation. We are also able to measure the stellar orbital properties from these general models. The most massive galaxies are strongly biased to tangential orbits near the BH, consistent with binary BH models, while lower mass galaxies have a range of anisotropies, consistent with an adiabatic growth of the BH. 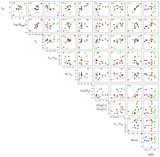