We report 1.1-2.4 μm multiband photometry of the small Uranian satellites Puck and Portia and of the small Neptunian satellite Proteus obtained with the Hubble Space Telescope and its near-infrared camera NICMOS. The surface of Puck (and likely Portia) displays an absorption feature matching the 2.0 μm band of water ice. In the case of Proteus, a shallower absorption is detected in the long-wavelength region of the spectrum. Although water ice cannot be entirely ruled out, this feature could also be produced by CH- or C≡N-bearing material. Future spectroscopic observations at high angular resolution are needed to further investigate the nature of the compounds covering the surface of the small moons of Uranus and Neptune. 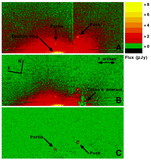