Hubble Space Telescope (HST) ultraviolet Space Telescope Imaging Spectrograph (STIS) imaging and spectroscopy of the low-luminosity active galactic nucleus (LLAGN) NGC 4303 have identified the previously detected UV-bright nucleus of this galaxy as a compact, massive, and luminous stellar cluster. The cluster with a size (FWHM) of 3.1 pc and an ultraviolet luminosity logL1500Å(ergss-1 Å-1)=38.33 is identified as a nuclear super-star cluster (SSC) like those detected in the circumnuclear regions of spirals and starburst galaxies. The UV spectrum showing the characteristic broad P Cygni lines produced by the winds of massive young stars is best fitted by the spectral energy distribution of a massive cluster of 105 Msolar (for a Salpeter initial mass function law with lower mass cutoff of 1 Msolar) generated in an instantaneous burst 4 Myr ago. The ionizing energy produced by this cluster exceeds the flux needed to explain the nuclear Hα luminosity. No evidence for an additional nonthermal ionizing source associated with an accreting black hole is detected in the ultraviolet. These new HST/STIS results unambiguously show the presence of a compact SSC in the nucleus of a low-luminosity AGN, which is also its dominant ionizing source. We hypothesize that at least some LLAGNs in spirals could be understood as the result of the combined ionizing radiation emitted by an evolving SSC (i.e., determined by the mass and age) and a black hole accreting with low radiative efficiency (i.e., radiating at low sub-Eddington luminosities) coexisting in the inner few parsecs region. Complementary multifrequency studies give the first hints of the very complex structure of the central 10 pc of NGC 4303, where a young SSC apparently coexists with a low-efficiency accreting black hole and with an intermediate/old compact star cluster and where, in addition, an evolved starburst could also be present. If structures such as those detected in NGC 4303 are common in the nuclei of spirals, the modeling of the different stellar components and their contribution to the dynamical mass has to be established accurately before deriving any firm conclusion about the mass of central black holes of few to several million solar masses. Based on observations with the NASA/ESA Hubble Space Telescope, obtained at the Space Telescope Science Institute, which is operated by the Association of universities for Research in Astronomy, Inc., under NASA contract NAS 5-26555. Based on observations with the William Herschel Telescope operated on the island of La Palma by the ING in the Spanish Observatorio del Roque de los Muchachos of the Instituto de Astrofísica de Canarias. 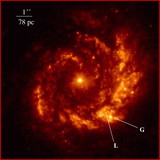