We investigated the line profile of moderately optically thick molecular transitions from collapsing protostellar envelopes. Using the inside-out collapse model, we simulated high angular resolution observations, which can probe the infall motion of the inner region better than low angular resolution observations. The degree of line asymmetry becomes substantially larger as the observing beam size becomes smaller. The self-absorption dip at the central velocity also develops a noticeable asymmetry. Therefore, suitability of collapse tracers depends on the angular resolution of the instrument used. Inclusion of the continuum emission from the central object produces another absorption dip on the redshifted side of the line; i.e., the line shows an inverse P Cygni profile. This effect is larger in the submillimeter band than in longer wavelength bands because of the bright continuum emission from dust grains. This redshifted dip is a good probe of the infall motion at the very inner part of the infalling envelope, and is also sensitive to other physical conditions, such as the depletion of molecules and the distribution of dust grains. We discuss how the line profile is affected by the variation of model parameters, such as molecular abundance, infall radius, and luminosity of the central object. In addition to the inside-out collapse model, we also discuss line profiles generated from Hunter's similarity solutions. Since high angular resolution can be achieved by aperture synthesis, its effect on the line profile was examined by simulating observations of the Sub-millimeter Array (SMA) toward B335, as an example. Only the central absorption dip part of the line profile is affected when the SMA is simulated. The simulated SMA line profile is weaker than the profile generated with a Gaussian beam because of the missing short-spacing flux. If the source is closer, or if the size of the element antenna of the interferometer is larger, even the line peaks can be affected. 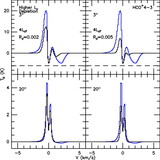