The Fate of the First Galaxies. II. Effects of Radiative Feedback

We use three-dimensional cosmological simulations with radiative transfer to study the formation and evolution of the first galaxies in a ΛCDM cosmology. The simulations include continuum radiative transfer using the optically thin variable Eddington tensor (OTVET) approximation and line radiative transfer in the H2 Lyman-Werner bands of the UV background radiation. Chemical and thermal processes are treated in detail, particularly the ones relevant for H2 formation and destruction. We find that the first luminous objects (``small-halo objects'') are characterized by bursting star formation (SF) that is self-regulated by a feedback process acting on cosmological instead of galactic scales. The global SF history is regulated by the mean number of ionizing photons that escape from each source, ∊UV<fesc>. It is almost independent of the assumed SF efficiency parameter, ∊*, and the intensity of the dissociating background. The main feedback process that regulates the SF is the reformation of H2 in front of H II regions and inside relic H II regions. The H II regions remain confined inside filaments, maximizing the production of H2 in overdense regions through cyclic destruction/reformation of H2. If ∊UV<fesc>>10- 7/∊*, the SF is self-regulated, photoevaporation of small-halo objects dominates the metal pollution of the low-density intergalactic medium, and the mass of produced metals depends only on <fesc>. If ∊UV<fesc><~10- 7/∊*, positive feedback dominates, and small-halo objects constitute the bulk of the mass in stars and metals until at least redshift z~10. Small-halo objects cannot reionize the universe because the feedback mechanism confines the H II regions inside the large-scale structure filaments. In contrast to massive objects (``large halos''), which can reionize voids, small-halo objects partially ionize only the dense filaments while leaving the voids mostly neutral. 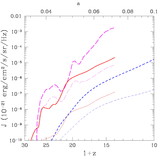