We present a detailed nonspherical modeling of dark matter halos on the basis of a combined analysis of high-resolution halo simulations (12 halos with N~106 particles within their virial radius) and large cosmological simulations (five realizations with N=5123 particles in a 100h-1 Mpc box size). The density profiles of those simulated halos are well approximated by a sequence of the concentric triaxial distribution with their axis directions being fairly aligned. We characterize the triaxial model quantitatively by generalizing the universal density profile, that has previously been discussed only in the framework of the spherical model. We obtain a series of practically useful fitting formulae in applying the triaxial model: the mass and redshift dependence of the axis ratio, the mean of the concentration parameter, and the probability distribution functions of the axis ratio and the concentration parameter. These accurate fitting formulae form a complete description of the triaxial density profiles of halos in cold dark matter models. Our current description of the dark halos will be particularly useful in predicting a variety of nonsphericity effects, to a reasonably reliable degree, including the weak and strong lens statistics, the orbital evolution of galactic satellites and triaxiality of galactic halos, and the nonlinear clustering of dark matter. In addition, this provides a useful framework for the nonspherical modeling of the intracluster gas, which is crucial in discussing the gas and temperature profiles of X-ray clusters and the Hubble constant estimated via the Sunyaev-Zeldovich effect. 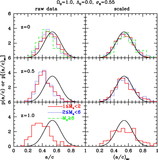