We present an evolutionary scenario for the spin-up and evolution of binary millisecond pulsars, according to which the companion of the pulsar PSR J1740-5340, recently discovered as a binary with orbital period of 32.5 hr in the globular cluster NGC 6397, is currently in a phase of ``radio-ejection'' mass loss from the system. The optical counterpart is a star as luminous as the cluster turnoff stars, but with a lower Teff (a larger radius), which we model with a star of initial mass compatible with the masses evolving in the cluster (~=0.85 Msolar). This star has suffered Roche lobe overflow while evolving off the main sequence, spinning up the neutron star to the present period of 3.65 ms. At present, Roche lobe overflow due to the nuclear evolution of the pulsar companion and to systemic angular momentum losses by magnetic braking is still going on, but accretion is inhibited by the momentum exerted by the radiation of the pulsar on the matter at the inner Lagrangian point. The presence of this matter around the system is consistent with the long-lasting irregular radio eclipses seen in the system. Roche lobe deformation of the mass losing component is also necessary to be compatible with the optical light curve. The ``radio-ejection'' phase, which had been recently postulated by us to deal with the problem of the lack of submillisecond pulsars, can be initiated only if the system is subject to intermittency in the mass transfer during the spin-up phase. In fact, only when the system is detached is the pulsar radio emission not quenched and possibly able to prevent further mass accretion because of the action of the pulsar pressure at the inner Lagrangian point. We propose and discuss the idea that a plausible reason for the system to be expected to detach is the irradiation of the mass-losing component by the X-ray emission powered during the accretion phase. We finally discuss the consequences of the binary evolution leading to PSR J1740-5340, and its relation to other possible optical counterparts. 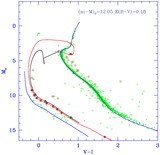