Detection of a Supernova Signature Associated with GRB 011121

Using observations from an extensive monitoring campaign with the Hubble Space Telescope, we present the detection of an intermediate-time flux excess that is redder in color relative to the afterglow of GRB 011121, currently distinguished as the gamma-ray burst with the lowest known redshift. The red ``bump,'' which exhibits a spectral rollover at ~7200 Å, is well described by a redshifted Type Ic supernova that occurred approximately at the same time as the gamma-ray burst event. The inferred luminosity is about half that of the bright supernova SN 1998bw. These results serve as compelling evidence for a massive star origin of long-duration gamma-ray bursts. Models that posit a supernova explosion weeks to months preceding the gamma-ray burst event are excluded by these observations. Finally, we discuss the relationship between spherical core-collapse supernovae and gamma-ray bursts. Based on observations with the NASA/ESA Hubble Space Telescope, obtained at the Space Telescope Science Institute, which is operated by the Association of Universities for Research in Astronomy, Inc., under NASA contract NAS5-26555. 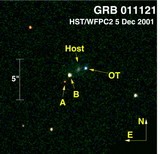