The evolution of Population III stars (Z=0) is followed from the pre-main-sequence phase up to the asymptotic giant branch (AGB) phase for intermediate-mass stars and up to C ignition in more massive stars. Our grid includes 11 stars, covering the mass range 0.8-20 Msolar. During the H and He core burning phases an overshooting characterized by d=0.20HP was applied, and during the AGB phase a small extension of the convective envelope was also allowed, characterized by d=0.05HP. We find that at the beginning of the AGB phase, following the development of a convective instability in the He-burning shell, a secondary convective zone forms at the He-H discontinuity. This unusual convective zone then expands and overlaps with the region previously occupied by the receding He-driven instability. Carbon is engulfed and an H flash takes place as a result of the activation of the CNO cycle. Following these successive (H+He) flashes, the convective envelope penetrates deeper into the star, reaches the secondary H convective shell, and allows CNO catalysts to be dredged up to the surface. These mixing episodes, which have been found to occur in our 1, 1.5, 2, 3, 4, and 5 Msolar models, increase the carbon abundance in the envelope and allow low- and intermediate-mass stars to achieve a ``standard'' thermally pulsing AGB phase, confirming the recent results by Chieffi and collaborators. We also find that at the beginning of the double shell burning evolution, our 4 and 5 Msolar models experience so-called degenerate thermal pulses, which are very similar to those found by Frost et al. but absent from the Chieffi et al. simulations. Finally, in the 7 Msolar model, the CNO envelope abundance following the second dredge-up is so large that the star does not experience the carbon injection episode and follows a standard thermally pulsing AGB evolution. Our computations also indicate that, thanks to the small overshooting at the base of the convective envelope, the third dredge-up is already operating in stars with M>=1.5 Msolar after a few pulses, and that by the end of our modeling, hot bottom burning is activated in stars more massive than ~2 Msolar. This evolutionary behavior suggests that primordial low- and intermediate-mass stars could have been significant contributors to the production of primary 12C and 14N and may have contributed to some extent to the production of Mg and Al and possibly s-process elements (despite the lack of iron seeds) in the early universe. 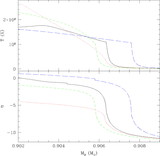