We report the discovery of two faint ultracool companions to the nearby (d~17.9 pc) young G2 V star HD 130948 (HR 5534, HIP 72567) using the Hokupa'a adaptive optics (AO) instrument mounted on the Gemini North 8 m telescope. Both objects have the same common proper motion as the primary star as seen over a 7 month baseline and have near-IR photometric colors that are consistent with an early L classification. Near-IR spectra taken with the NIRSPEC AO instrument on the Keck II telescope reveal K I lines, FeH, and H2O band heads. Based on these spectra, we determine that both objects have a spectral type of dL2 with an uncertainty of two spectral subclasses. The position of the new companions on the H-R diagram in comparison with theoretical models is consistent with the young age of the primary star (<0.8 Gyr) estimated on the basis of X-ray activity, lithium abundance, and fast rotation. HD 130948B and C likely constitute a pair of young contracting brown dwarfs with an orbital period of about 10 yr and will yield dynamical masses for L dwarfs in the near future. Based on observations obtained at the Gemini Observatory, which is operated by the Association of Universities for Research in Astronomy, Inc., under a cooperative agreement with the NSF on behalf of the Gemini partnership: the National Science Foundation (US), the Particle Physics and Astronomy Research Council (UK), the National Research Council (Canada), CONICYT (Chile), the Australian Research Council (Australia), CNPq (Brazil), and CONICET (Argentina). 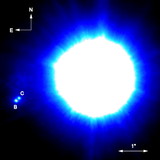