Accretion during the Merger of Supermassive Black Holes

We study the evolution of disk accretion during the merger of supermassive black hole binaries in galactic nuclei. In hierarchical galaxy formation models, the most common binaries are likely to arise from minor galactic mergers and have unequal-mass black holes. Once such a binary becomes embedded in an accretion disk at a separation of a~0.1 pc, the merger proceeds in two distinct phases. During the first phase, the loss of orbital angular momentum to the gaseous disk shrinks the binary on a timescale of ~107 yr. The accretion rate onto the primary black hole is not increased, and can be substantially reduced, during this disk-driven migration. At smaller separations, gravitational radiation becomes the dominant angular momentum loss process, and any gas trapped inside the orbit of the secondary is driven inward by the inspiralling black hole. The implied accretion rate just prior to coalescence exceeds the Eddington limit, so the final merger is likely to occur within a common envelope formed from the disrupted inner disk and to be accompanied by high-velocity (~104 km s-1) outflows. 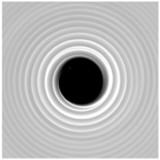