We report 1.87 μm photometry and astrometry of the inner satellites (Proteus, Larissa, Galatea, and Despina) and ring arcs of Neptune, obtained with the Hubble Space Telescope and its near-infrared camera NICMOS. From comparison with the Voyager data obtained at visible wavelengths, the small bodies orbiting within the ring region of Neptune have a near-infrared albedo consistently low, but higher than at visible wavelengths for most of the satellites, ranging from p1.87μm=0.058 (Despina) to p1.87μm=0.094 (Proteus). The ring arcs display a reddish spectral response similar to the satellites' in the 0.5-1.9 μm wavelength range. If we consider an earlier photometric measurement of Proteus obtained at K band, the satellite's albedo shows a depression at 2.2 μm that could be the first spectral evidence for the presence of CH or CN bearing material on its surface. Although astrometry of the inner moons of Neptune yields positions consistent with the predictions derived from Voyager images, the long time base between the Voyager and NICMOS observations allows us to refine our knowledge of their mean motions and semimajor axes, and to decrease the errors associated with these measurements. In addition, we confirm a mismatch between the mean semimajor axis of the ring arcs and the location of the 42:43 corotation inclined resonance due to Galatea. This result calls into question the ability of this resonance to confine the arcs azimuthally. 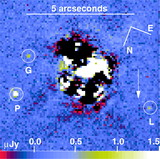