The Star Formation History of LGS 3

We have determined the distance and star formation history of the Local Group dwarf galaxy LGS 3 from deep Hubble Space Telescope WFPC2 observations. LGS 3 is intriguing because ground-based observations showed that, while its stellar population is dominated by old, metal-poor stars, there is a handful of young, blue stars. Also, the presence of H I gas makes this a possible ``transition object'' between dwarf spheroidal and dwarf irregular galaxies. The HST data are deep enough to detect the horizontal branch and young main sequence for the first time. A new distance of D=620+/-20 kpc has been measured from the positions of the tip of the red giant branch, the red clump, and the horizontal branch. The mean metallicity of the stars older than 8 Gyr is [Fe/H]=-1.5+/-0.3. The most recent generation of stars has [Fe/H]~-1. For the first few Gyr the global star formation rate was several times higher than the historical average and has been fairly constant since then. However, we do see significant changes in stellar populations and star formation history with radial position in the galaxy. Most of the young stars are found in the central 63 pc (21"), where the star formation rate has been relatively constant, while the outer parts have had a declining star formation rate. Based on observations with the NASA/ESA Hubble Space Telescope, obtained at the Space Telescope Science Institute, which is operated by the Association of Universities for Research in Astronomy, Inc., under NASA contract NAS 5-26555. 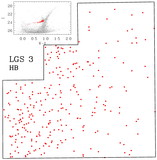