We report an observation by the Chandra X-Ray Observatory of 4U 2127+119, the X-ray source identified with the globular cluster M15. The Chandra observation reveals that 4U 2127+119 is in fact two bright sources, separated by 2.7". One source is associated with AC 211, the previously identified optical counterpart to 4U 2127+119, a low-mass X-ray binary (LMXB). The second source, M15 X-2, is coincident with a 19th U-magnitude blue star that is 3.3" from the cluster core. The Chandra count rate of M15 X-2 is 2.5 times higher than that of AC 211. Prior to the 0.5" imaging capability of Chandra, the presence of two so closely separated bright sources would not have been resolved. The optical counterpart, X-ray luminosity, and spectrum of M15 X-2 are consistent with it also being an LMXB system. This is the first time that two LMXBs have been seen to be simultaneously active in a globular cluster. The discovery of a second active LMXB in M15 solves a long-standing puzzle where the properties of AC 211 appear consistent with it being dominated by an extended accretion disk corona, and yet 4U 2127+119 also shows luminous X-ray bursts requiring that the neutron star be directly visible. The resolution of 4U 2127+119 into two sources suggests that the X-ray bursts did not come from AC 211 but rather from M15 X-2. We discuss the implications of this discovery for understanding the origin and evolution of LMXBs in globular clusters as well as X-ray observations of globular clusters in nearby galaxies. 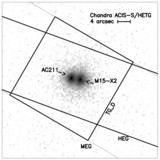