We quantitatively study the probability distribution function (PDF) of cosmological nonlinear density fluctuations from N-body simulations with a Gaussian initial condition. In particular, we examine the validity and limitations of one-point and two-point lognormal PDF models against those directly estimated from the simulations. We find that the one-point lognormal PDF very accurately describes the cosmological density distribution even in the nonlinear regime (rms variance σnl<~4, overdensity δ<~100). Furthermore, the two-point lognormal PDFs are also in good agreement with the simulation data from linear to fairly nonlinear regimes, while they deviate slightly from the simulation data for δ<~-0.5. Thus, the lognormal PDF can be used as a useful empirical model for the cosmological density fluctuations. While this conclusion is fairly insensitive to the shape of the underlying power spectrum of density fluctuations P(k), models with substantial power on large scales, i.e., n≡dlnP(k)/dlnk<~-1, are better described by the lognormal PDF. On the other hand, we note that the one-to-one mapping of the initial and evolved density fields, consistent with the lognormal model, does not approximate the broad distribution of their mutual correlation even on average. Thus, the origin of the phenomenological lognormal PDF approximation still remains to be understood. 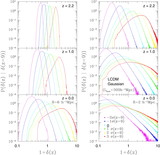