RR Lyrae Variables in the Globular Clusters of M31: A First Detection of Likely Candidates

The purpose of this Letter is to show that RR Lyrae variables exist and can be detected in M31 globular clusters. We report on the first tentative identification of RR Lyrae candidates in four globular clusters of the Andromeda galaxy, i.e., G11, G33, G64, and G322. Based on Hubble Space Telescope Wide Field Planetary Camera 2 archive observations in the F555W and F814W filters spanning a total interval of about 5 consecutive hours, we find evidence for two, four, 11, and eight RR Lyrae variables of both ab and c Bailey types in G11, G33, G64, and G322, respectively. Several more candidates can be found by relaxing slightly the selection criteria. These numbers are quite consistent with the horizontal-branch (HB) morphology exhibited by the four clusters, starting from the very blue HB in G11 and progressively moving to redder HBs in G64, G33, and G322. Based on observations made with the NASA/ESA Hubble Space Telescope, obtained from the data archive at the Space Telescope Science Institute. STScI is operated by the Association of Universities for Research in Astronomy, Inc., under NASA contract NAS5-26555. 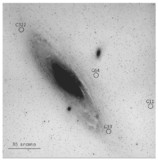