We use data from the Hipparcos catalog and the Barbier-Brossat & Figon catalog of stellar radial velocities to test the hypothesis that the β Pic planetesimal disk was disrupted by a close stellar encounter. We trace the space motions of 21,497 stars and discover 18 that have passed within 5 pc of β Pic in the past 1 Myr. β Pic's closest encounter is with the K2 III star HIP 27628 (~0.6 pc), but dynamically the most important encounter is with the F7 V star HIP 23693 (~0.9 pc). We calculate the velocity and eccentricity changes induced by the 18 perturbations and conclude that they are dynamically significant if planetesimals exist in a β Pic Oort cloud. We provide a first-order estimate for the evolutionary state of a β Pic Oort cloud and conclude that the primary role of these stellar perturbations would be to help build a comet cloud rather than destroy a preexisting structure. The stellar sample is ~20% complete and motivates future work to identify less common close interactions that would significantly modify the observed circumstellar disk. For future radial velocity study, we identify six stars in the Hipparcos catalog that may have approached β Pic to within 0.1 pc and therefore remain as candidate disk perturbers. 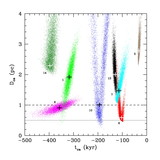