We performed 12CO (1-0), 13CO (1-0), and HCN (1-0) interferometric observations of the central region (about 450 pc in radius) of M82 with the Nobeyama Millimeter Array and have successfully imaged a molecular superbubble and spurs. The center of the superbubble is clearly shifted from the nucleus by 140 pc. This position is close to that of the massive black hole (BH) of >~460 Msolar and the 2.2 μm secondary peak (a luminous supergiant-dominated cluster), which strongly suggests that these objects may be related to the formation of the superbubble. Consideration of star formation in the cluster based on the infrared data indicates that (1) the energy release from supernovae can account for the kinetic energy of the superbubble, (2) the total mass of stellar-mass BHs available for building up the massive BH may be much higher than 460 Msolar, and (3) it is possible to form the middle-mass BH of 102-103 Msolar within the timescale of the superbubble. We suggest that the massive BH was produced and is growing in the intense starburst region. 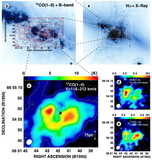