We use a high-resolution N-body simulation to study the velocity bias of dark matter halos, the difference in the velocity fields of dark matter and halos, in a flat low-density cold dark matter (ΛCDM) model. The high force, 2 h-1 kpc, and mass, 109 h-1 Msolar, resolution allows dark matter halos to survive in very dense environments of groups and clusters, making it possible to use halos as galaxy tracers. We find that the velocity bias, bv,12, measured as a ratio of pairwise velocities of the halos to that of the dark matter, evolves with time and depends on scale. At high redshifts (z~5), halos generally move faster than the dark matter on almost all scales: bv,12(r)~1.2, r>0.5 h-1 Mpc. At later moments, the bias decreases and gets below unity on scales less than r~5 h-1 Mpc: bv,12(r)~(0.6-0.8) at z=0. We find that the evolution of the pairwise velocity bias follows and probably is defined by the spatial antibias of the dark matter halos at small scales. The one-point velocity bias, bv, defined as the ratio of the rms velocities of halos and dark matter, provides a more direct measure of the difference in velocities, because it is less sensitive to the spatial bias. We analyze bv in clusters of galaxies and find that halos are ``hotter'' than the dark matter: bv=1.2-1.3 for r=(0.2-0.8)rvir, where rvir is the virial radius. At larger radii, bv decreases and approaches unity at r=(1-2)rvir. We argue that dynamical friction may be responsible for this small positive velocity bias (bv>1) found in the central parts of clusters. We do not find significant systematic difference in the velocity anisotropy of halos and the dark matter. The velocity anisotropy function, β, of dark matter particles can be approximated as β(x)=0.15+2x/(x2+4), where the distance x is measured in units of the virial radius. 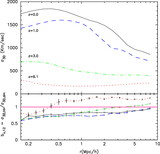