We report new observations of the spectrum of Ganymede in the spectral range 1160-1720 Å made with the Space Telescope Imaging Spectrograph (STIS) on the Hubble Space Telescope (HST) on 1998 October 30. The observations were undertaken to locate the regions of the atomic oxygen emissions at 1304 and 1356 Å, previously observed with the Goddard High Resolution Spectrograph on HST, that Hall et al. claimed indicated the presence of polar aurorae on Ganymede. The use of the 2" wide STIS slit, slightly wider than the disk diameter of Ganymede, produced objective spectra with images of the two oxygen emissions clearly separated. The O I emissions appear in both hemispheres, at latitudes above |40|°, in accordance with recent Galileo magnetometer data that indicate the presence of an intrinsic magnetic field such that Jovian magnetic field lines are linked to the surface of Ganymede only at high latitudes. Both the brightness and relative north-south intensity of the emissions varied considerably over the four contiguous orbits (5.5 hr) of observation, presumably because of the changing Jovian plasma environment at Ganymede. However, the observed longitudinal nonuniformity in the emission brightness at high latitudes, particularly in the southern hemisphere, and the lack of pronounced limb brightening near the poles are difficult to understand with current models. In addition to observed solar H I Lyα reflected from the disk, extended Lyα emission resonantly scattered from a hydrogen exosphere is detected out to beyond two Ganymede radii from the limb, and its brightness is consistent with the Galileo UVS measurements of Barth et al. 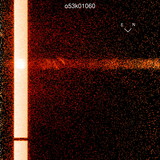