We have searched six stars with known radial velocity planetary companions for circumstellar disks. Disks are expected around stars with planetary systems that accreted from regular protoplanetary disks, and remnant disks are expected to be similar to our solar system's Kuiper Belt. To date, we have detected circumstellar disks around three such stars: 55 Cnc, ρ CrB, and HD 210277. All these systems now resemble mature planetary systems with Jupiter-mass companions and Kuiper Belt-like disks. Our previous detection of the 55 Cnc disk (Trilling & Brown) is included here to place that disk in the context of the other two newly detected disks. Measuring the inclinations of the disks and assuming the disks are coplanar with the planets' orbits determines the masses of the planets around these three stars to be 1.9+1.1-0.4 MJ, 1.5+0.2-0.1 MJ, and 2.2+0.6-0.2 MJ, respectively (1 MJ is one Jupiter mass). We also report nondetections for three stars--51 Peg, υ And, and Gl876--that are known to have radial velocity companions. A number of possibilities exist to explain nondetections of disks, from the absence of a disk to limits on disk mass, radial extent, or inclination. We may also be looking through a disk's central hole, especially for the nearby star Gl876. The radial brightness profiles of each of the observed disks follow a power law with index ~-5, including a power of -2 from the stellar flux drop off, similar to the suggested value for our solar system's Kuiper Belt. This likely suggests that uniform physical processes govern the Kuiper Belt's population out to at least 100 AU, and may be ubiquitous among disks. Last, we discuss how disk characterizations can lead us toward refining theories of planetary system formation. 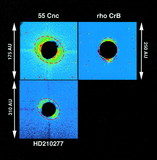