The Hubble Deep Field South: Formulation of the Observing Campaign

Deep, multiband observations of high Galactic latitude fields are an essential tool for studying topics ranging from Galactic structure to extragalactic background radiation. The Hubble Deep Field (HDF-N) observations obtained in 1995 December established a standard for such narrow, deep surveys. The field has been extensively analyzed by a variety of groups and has been widely studied with imaging and spectroscopy over wavelengths ranging from 10-3 to 2×105 μm. We describe here a second deep field campaign (HDF-S), this time in the southern hemisphere, undertaken by the Hubble Space Telescope (HST) in 1998 October in a program very similar to the northern Hubble Deep Field. Imaging and spectroscopy of three adjacent fields in the southern continuous viewing zone were obtained simultaneously for 150 orbits, and a mosaic of flanking fields was imaged for 27 additional orbits. Two important features of the HDF-S distinguish it from the HDF-N: the campaign included parallel observations by the three main HST instruments-WFPC2, STIS, and NICMOS-and the HDF-S location was selected to place a bright z=2.24 quasar in the STIS field of view. The HDF-S observations consist of WFPC2 images in filters close to U, B, V, and I, a deep STIS image of the field surrounding the quasar, spectroscopy of the quasar with STIS from 1150 to 3560 Å, and deep imaging of an adjacent field with NICMOS camera 3 at 1.1, 1.6, and 2.2 μm. All of the HDF-S data were fully reduced and made publicly available within 2 months of the observations, and we describe here the selection of the fields and the observing strategy that was employed. Detailed descriptions of the data and the reduction techniques for each field, together with the corresponding source catalogs, appear in separate papers. 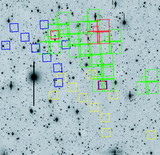