We present Hubble Space Telescope Planetary Camera UVI data for Hodge 301, the little-studied cluster 3' northwest of the central ionizing cluster R136 in 30 Doradus. The average reddening of Hodge 301 is found to be <EB-V>=0.28+/-0.05 mag from published infrared and ultraviolet photometry. Using two different sets of evolutionary models, we derive an age of about 20-25 Myr for Hodge 301, which makes it roughly 10 times as old as R136. Hodge 301 is the most prominent representative of the oldest population in the 30 Dor starburst region, a region that has undergone multiple star formation events. This range of ages is an important consideration for the modeling of starburst regions. Hodge 301 shows a widened upper main sequence largely caused by Be stars. We present a list of Be star candidates. The slope of the initial mass function for intermediate-mass, main-sequence stars ranging from 10 to 1.3 Msolar is found to be Γ=-1.4+/-0.1, in good agreement with a Salpeter law. There is no indication for a truncation or change of slope of the initial mass function (IMF) within this mass range. In accordance with the age of Hodge 301, no obvious pre-main-sequence stars are seen down to about 1 Msolar. We estimate that up to 41+/-7 stars with masses more than 12 Msolar may have turned into supernovae since the formation of the cluster. Multiple supernova explosions are the most likely origin of the extremely violent gas motions and the diffuse X-ray emission observed in the cluster surroundings. Based on observations made with the NASA/ESA Hubble Space Telescope, obtained at the Space Telescope Science Institute, which is operated by the Association of Universities for Research in Astronomy, Inc. under NASA contract NAS5-26555. 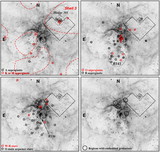