We report the discovery of three proplyd-like structures in the giant H II region NGC 3603. The emission nebulae are clearly resolved in narrowband and broadband HST/WFPC2 observations in the optical and broadband VLT/ISAAC observations in the near-infrared. All three nebulae are tadpole shaped, with the bright ionization front at the head facing the central cluster and a fainter ionization front around the tail pointing away from the cluster. Typical sizes are 6000 AUx20,000 AU The nebulae share the overall morphology of the proplyds (PROto PLanetarY DiskS) in Orion, but are 20 to 30 times larger in size. Additional faint filaments located between the nebulae and the central ionizing cluster can be interpreted as bow shocks resulting from the interaction of the fast winds from the high-mass stars in the cluster with the evaporation flow from the proplyds. Low-resolution spectra of the brightest nebula, which is at a projected separation of 1.3 pc from the cluster, reveal that it has the spectral excitation characteristics of an ultra compact H II region with electron densities well in excess of 104 cm-3. The near-infrared data reveal a point source superposed on the ionization front. The striking similarity of the tadpole-shaped emission nebulae in NGC 3603 to the proplyds in Orion suggests that the physical structure of both types of objects might be the same. We present two-dimensional radiation hydrodynamical simulations of an externally illuminated star-disk-envelope system, which was still in its main accretion phase when first exposed to ionizing radiation from the central cluster. The simulations reproduce the overall morphology of the proplyds in NGC 3603 very well, but also indicate that mass-loss rates of up to 10-5 Msolar yr-1 are required in order to explain the size of the proplyds. Due to these high mass-loss rates, the proplyds in NGC 3603 should only survive ~105 yr. Despite this short survival time, we detect three proplyds. This indicates that circumstellar disks must be common around young stars in NGC 3603 and that these particular proplyds have only recently been exposed to their present harsh UV environment. 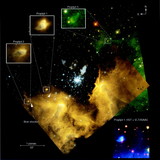