Young Galaxies: What Turns Them On?

Lyman break galaxies (LBGs) at z~3 exhibit number densities and clustering similar to local L* galaxies; however, their star formation rates are much higher. We explore the scenario in which LBGs are starburst galaxies triggered by collisions and thus provide an explanation for these key properties. The relative paucity of starburst galaxies at low redshift can be attributed to a much higher collision rate in the past. We use high-resolution cosmological N-body simulations and a hierarchical halo finder to estimate the galaxy collision rate as a function of time in the popular ΛCDM cosmological model. We find that bright collisional starbursts are frequent enough to account for most of the high-z (2.5-4.5) LBGs. Moreover, many of the objects are of relatively small mass, but they cluster about large-mass halos. They therefore exhibit strong clustering, similar to that observed and stronger than that of the relevant massive halos. 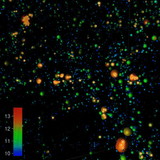