We report extreme-UV observations of the coronal Moreton wave and concurrent observations of ~10-100 MeV protons. Observations are carried out with the Extreme-UV Imaging Telescope and the Energetic and Relativistic Nuclei and Electron instrument on board the SOHO spacecraft. We study the proton events associated with coronal mass ejections (CMEs) centered near the central meridian. Observations reveal the initial injection of >~10 MeV protons during the period when the coronal Moreton wave was traversing the western hemisphere of the Sun, this being an early signature of the CME launch. Acceleration of the CME-associated protons starts during the CME liftoff, while the main proton production occurs several hours later, when the CME expands in the interplanetary medium. Between the first proton production and the maximum intensity time, a spectral softening is observed. We analyze in detail the 1997 September 24 event. Development of the event indicates that the spectral softening may be due to a change in the acceleration regime, so the proton production starts with the less intensive but hard-spectrum injection and then moves to the more intensive but soft-spectrum injection farther from the Sun. 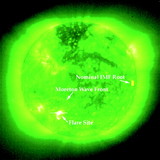