Ring Structure and Warp of NGC 5907: Interaction with Dwarf Galaxies

The edge-on, nearby spiral galaxy NGC 5907 has long been used as the prototype of a ``noninteracting'' warped galaxy. We report here the discovery of two interactions with companion dwarf galaxies that substantially change this picture. First, a faint ring structure is discovered around this galaxy that is likely due to the tidal disruption of a companion dwarf spheroidal galaxy. The ring is elliptical in shape with the center of NGC 5907 close to one of the ring's foci. This suggests that the ring material is in orbit around NGC 5907. No gaseous component to the ring has been detected either with deep Hα images or in Very Large Array H I 21 cm line maps. The visible material in the ring has an integrated luminosity <=108 Lsolar, and its brightest part has a color R-I~0.9. All of these properties are consistent with the ring being a tidally disrupted dwarf spheroidal galaxy. Second, we find that NGC 5907 has a dwarf companion galaxy, PGC 54419, which is projected to be only 36.9 kpc from the center of NGC 5907, close in radial velocity (ΔV=45 km s-1) to the giant spiral galaxy. This dwarf is seen at the tip of the H I warp and in the direction of the warp. Hence, NGC 5907 can no longer be considered noninteracting but is obviously interacting with its dwarf companions much as the Milky Way interacts with its dwarf galaxies. These results, coupled with the finding by others that dwarf galaxies tend to be found around giant galaxies, suggest that tidal interaction with companions, even if containing a mere 1% of the mass of the parent galaxy, might be sufficient to excite the warps found in the disks of many large spiral galaxies.

Partially based on observations taken with the Very Large Array of the National Radio Astronomy Observatory is a facility of the National Science Foundation operated by a cooperative agreement with Associated Universities, Inc. 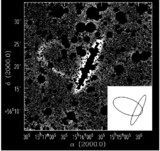