We present optical long-slit spectroscopy of the nucleus of the nearby radio galaxy M84 (NGC 4374 = 3C 272.1) obtained with the Space Telescope Imaging Spectrograph aboard the Hubble Space Telescope. Our spectra reveal that the nuclear gas disk seen in the Wide Field Planetary Camera 2 imaging by Bower et al. is rotating rapidly. The velocity curve has an S-shape with a peak amplitude of 400 km s-1 at 0.1" = 8 pc from the nucleus. To model the observed gas kinematics, we construct a thin Keplerian disk model that fits the data well if the rotation axis of the gas disk is aligned with the radio jet axis. These models indicate that the gasdynamics are driven by a nuclear compact mass of 1.5×109 Msolar with an uncertainty range of (0.9-2.6)×109 Msolar, and that the inclination of the disk with respect to the plane of the sky is 75°-85°. Of this nuclear mass, only <=2×107 Msolar can possibly be attributed to luminous mass. Thus, we conclude that a dark compact mass (most likely a supermassive black hole) resides in the nucleus of M84. 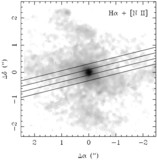