We present K' (2.1 mu m) observations of four nearby flocculent spirals, which clearly show low-level spiral structure and suggest that kiloparsec-scale spiral structure is more prevalent in flocculent spirals than previously supposed. In particular, the prototypical flocculent spiral NGC 5055 is shown to have regular, two-arm spiral structure to a radius of 4.0 kpc in the near-infrared, with an arm-interarm contrast of 1.3. The spiral structure in all four galaxies is weaker than that in grand design galaxies. Taken in unbarred galaxies with no large, nearby companions, these data are consistent with the modal theory of spiral density waves, which maintains that density waves are intrinsic to the disk. As an alternative, mechanisms for driving spiral structure with nonaxisymmetric perturbers are also discussed. These observations highlight the importance of near-infrared imaging for exploring the range of physical environments in which large-scale dynamical processes, such as density waves, are important. 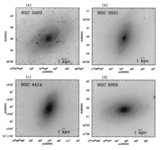