A Central Stellar Remnant in Puppis A

ROSAT observations of a feature in the center of the Puppis A supernova remnant suggest that it is the stellar remnant of the supernova. This feature has been known since Einstein HRI observations, but convincing evidence that it is unresolved has become available only through observations from the ROSAT HRI. The source has no optical counterpart to limiting magnitude B >~ 25.0, R >~ 23.6, nor is there an obvious radio counterpart to a limit of 0.75 mJy at 1.4 GHz. Timing analysis of the X-ray data has indicated neither pulsations nor variability on long time scales. We suggest that this source is the cooling neutron-star remnant of the Puppis A progenitor. The ~3700 yr age of the supernova remnant would make this the youngest known neutron star cooling via thermal processes. Assuming it originated at the center of expansion, located 6' to the northeast, requires the stellar remnant to have a transverse velocity ~1000 km s-1. The stellar remnant's velocity is directed roughly opposite to the average proper motion of the fast, oxygen-rich knots, believed to be fragments of the progenitor's outer core, which suggests an anisotropic explosion and recoil of a newly formed neutron star. 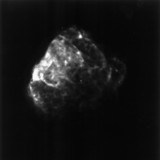